Why noise instrumentation is not always the dBs. 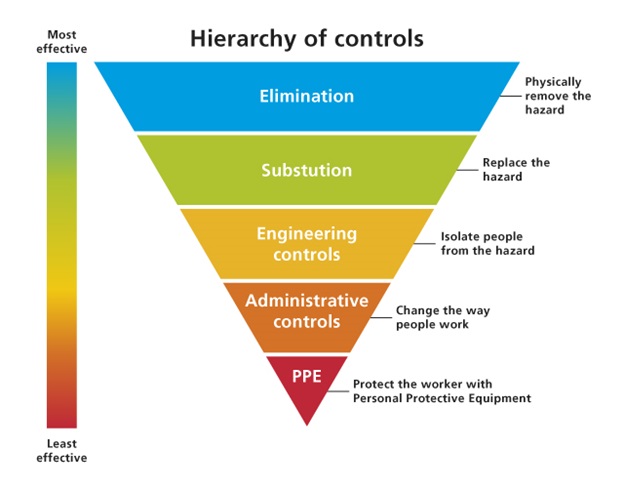 If you have to raise your voice to communicate face-to-face, in a socially-distanced workplace setting, then you probably have a noise problem. Pass Go, collect £200 and head straight to the hierarchy of controls (see Figure 1).

You may want to put your metaphorical £200 towards some hearing protection (as an interim measure), some training, advice or indeed a sound level meter (SLM) or noise dosimeter. Maybe I should declare an interest here, having worked directly in noise measurement and hearing protection because I have a bit of a bee-in-my-bonnet and I apologise in advance if this article turns into a rant.

What’s my issue? Instruments that claim to be CE compliant but that don’t actually meet the relevant IEC standard(s).

The health pandemic has thrown a similar spotlight on non-compliant PPE which have carried a flagrant CE mark; the British Safety Industry Federation (BSIF) produced some excellent resources as the PPE issue came to light. But how would you otherwise know without Trading Standards intervening? In Spain, it’s actually illegal under their ‘weights & measures’ legislation, to sell noise instrumentation, including SLMs, noise dosimeters and acoustic calibrators without them first being officially type (pattern) approved to the IEC standard(s). This process occurs elsewhere in the EU but in the UK it’s always been a case of caveat emptor except perhaps for legal measurements such as those undertaken by an Environmental Health Officer or a Noise Consultant. They often choose to get their instruments UKAS calibrated to mitigate any evidential risk should their findings be scrutinised in a court of law. However, it cannot be assumed that because an individual instrument passes the periodic tests of BS EN 61672:3 (also available as a similarly numbered IEC version), that that model (pattern) of instrument satisfies all the requirements of part 1 of the standard. For the majority of H&S professionals though, it means that care should be taken in the choice of instrument.

Noise measurement instrumentation is unusual amongst other forms of metrology in that it should be ‘calibrated’ before and after use with an acoustic calibrator. I dislike the word calibrator because it is something of a misnomer in that level and frequency are typically only checked at one value whilst linearity, frequency and impulse responses amongst many other parameters, remain unchecked. And it’s in this level of detail where low cost devices often fail to meet the standard. You can readily buy a low cost SLM for £20-£50 or indeed get a smartphone app for free. In the latter case, without using an external microphone and an acoustic calibrator, the results can’t be trusted and that’s official according to NIOSH in the USA.

Thinking back to the early SLMs of the 1950s, instruments were just a volt meter equipped with a microphone & preamplifier. They measured an RMS average sound pressure level value, scaled in decibels (dB) and effectively that’s what still exists today in these low cost SLM examples. ‘Professional instruments’ tend to offer an integrating function (Leq), peak measurements (Lp), octave band analysis for hearing protector selection and of course, a calibrator. Back in the day, there also used to be more accuracy grades of instrument and I’m thinking specifically about the lowest type 3 indicator (rather than the more accurate laboratory, precision or industrial) which I’m suggesting could be resurrected.

Today, the Control of Noise at Work Regulations (2005) and application standards like ISO 9612, which specifies an engineering method for measuring workers’ exposure to noise in a working environment, call for instruments to conform to Class 1 or 2, roughly equivalent to the old precision and industrial grades. Rather than ‘outlawing’ low cost instruments altogether they could carry an indicator Class 3 grade, which would ‘allow’ their general use but not be relied upon for noise at work applications. Better still, the UK could adopt formal pattern approval like Spain, but I can’t see this ever happening as we exit the EU.

There, I feel better for getting that off my chest and I’d strongly advise you to approach one of the well-qualified HCA members who will gladly help you spend your £200 towards a product or service of your choice.

Neal Hill is a Director of One Plus One Consulting Ltd., a marketing and product management consultancy founded in early 2017. Neal has worked in the noise industry since 1982, in sales, marketing and product management roles with CEL & Nicolet Instruments, Racal Acoustics and Casella. He now helps companies get the most from their new product development and marketing budgets, offering diverse advice from process to requirements capture as well as writing content for marketing purposes.